Following is the full transcript of Ramona Hacker’s TEDx Talk titled “6 Steps to Improve Your Emotional Intelligence” at TEDxTUM conference. This event occurred on December 2, 2017.

Listen to the MP3 audio while reading the transcript: 6 Steps to Improve Your Emotional Intelligence by Ramona Hacker @ TEDxTUM

I want to start with doing a small survey with you. For that, please put your hands into your laps and close your eyes. I will now pose a couple of questions to which I would love to have a very honest answer, just by a show of hands. No worries; no one will judge you for it.

The first question is: who of you has thought within the past week about whether or not you are an emotionally intelligent person?

Now that you think of it, would you consider yourself emotionally intelligent? Please raise your hand if you do so.

And who of you has ever worked consciously on your emotional skill?

Thank you for sharing. You can now open your eyes again. And thank you also for being so very honest with me.

Now I also want to be honest with you. Emotional intelligence is not necessarily my main strength. When I make decisions, I base them solely on my rationale. If friends from school hear me do this talk right now, they will be very surprised because back then I didn’t even consider emotions as something crucial. They weren’t logical. I couldn’t explain them very well. So why would I care?

I never even actively thought about the topic until five years ago when I dropped out of a job, because of a burnout. It was then that my very emotional side was revealed. And while I rarely cry before especially not in front of people, I just couldn’t stop the tears from streaming down my face at the most inconvenient of times anymore.

Several times a day I went to the restroom just to hide my suffering, and that made very clear to me that I need to work on this issue.

But now what is it this mysterious emotional intelligence?

When most people think of it, they stop at the term “emotional.” What do you connect to it?

I’d say it has a bad connotation describing a person having or expressing strong feelings. And this connotation is also then therefore emotional intelligence, a misconception that I had as well.

First, emotional awareness, so empathy towards others but also towards the self.

Second, the ability to harness emotions and apply them to tasks like problem-solving.

And third, the ability to manage emotions which includes regulating your own emotions but also calming down or cheering up other people.

As you can clearly see by this contrast, very emotional people do not necessarily or automatically have a high emotional intelligence, because they may only display their emotions freely without thinking about or knowing why they have them. And maybe not even considering the appropriateness of showing them in the respective situation.

Now, lacking emotional intelligence as a kid or teenager meant for me that I would channel things like loneliness or fear sometimes into aggression.

ALSO READ:   The Great Migration and the Power of a Single Decision: Isabel Wilkerson (Full Transcript)

My family background – well, let’s say — is improvable. So instead of finding the support that I’d need, I’d rather get it on the basis of “oh, don’t be such a crybaby” than anything else.

My parents didn’t teach me the value of emotions. Therefore losing friends or breakups would hit me harder than many others, because I could neither fully understand my emotions, nor those of the others. They just didn’t make sense. I thought I’m not supposed to feel that way, because I’ve never learned how to deal with emotions.

And with time passing, I realized I’m just one of many people having this issue. Have you ever thought about why people judge or bully each other, beat kids or at work or even in toxic friendships or relationships?

And it can be anything ranging from sexism to racism. It’s because of insecurity due to a lack of emotional intelligence, because it’s hard to understand the difference between yourself and someone else. And it’s even harder to connect on an emotional level to truly comprehend where someone else is coming from.

And in order to change that, we first of all need to consider emotional intelligence as a crucial skill in our society, and then also take the time to consciously work on it. Currently we do neither.

And we also don’t give our kids, for example, the space to learn the skill.

Kids nowadays — they are supposed to be good in school, do sports, play an instrument, learn a foreign language, and maybe even some additional things. They don’t get the chance to get to know who they are, connect to themselves, and to their emotions.

And a fundamental part of being emotionally intelligent means knowing who you are. And for them to learn, we also need to learn it ourselves to be the role model that they need.

Now you might be thinking, yeah sure, but how do we approach this topic individually but also as a society? And basically it comes down to what everything comes down to: We need to learn a new skill.

So when you learn a new skill, you first of all need to become aware of your incompetence in the field. So I got there with my burnout. I’m pretty sure that you can manage that more easily and then you work on the skill until you manage it to the level that you want. And after a while you will even be able to apply it without actively thinking about it. 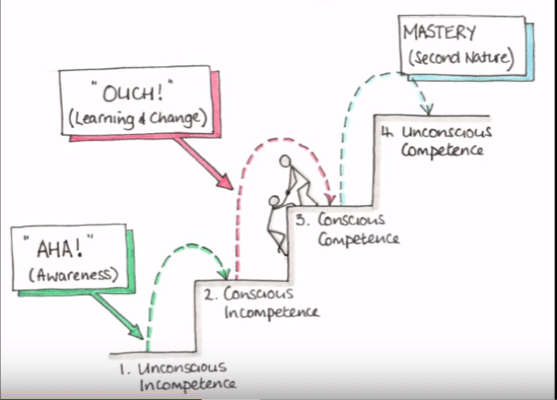 Take, for example, your driver’s license. After a while you stop thinking, oh I need to put in the next gear, you just do so. Unconscious competence achieved.

Now the tricky thing, though, is to get from conscious incompetence to conscious competence. And we do that by learning the basics of how a car works and by practicing. So in the beginning it may be difficult to steer the wheel at the same time as putting in the next gear, but after a while it gets easier.

And with emotional intelligence, it’s basically the same thing. So I tried to compile my experiences and came up with a 6-Step Guide that hopefully helps people to get more emotionally intelligent.

And the first thing that we need to do is we need to acknowledge our emotions. But not only as such but as something valuable because that’s what they are.

According to research by Antonio Damasio, people whose brain parts that are responsible for emotions have been damaged found themselves even having a harder time taking rational decisions. That’s how valuable they are.

And the very first small but simple thing that you can do is you can ask people with genuine interest how they are feeling. And when you’re asked, answer with authenticity when you feel good but also when you feel bad, so no I’m fine but also no complaining.

Instead of complaining about your colleagues, say I don’t feel appreciated at work or whatever it comes down to. Make it an iMessage and when people show emotions, tell them that it’s okay to have those. Talk about them. Erase the taboo that I feel exists in our society of talking about emotions, because that’s more often than not the one thing that keeps us from making the next step.

And the next step is differentiating and analyzing emotions. So sometimes when we talk about or express a feeling, we substitute the original one with one that we think we know better or are better at handling.

But there are actually a lot of different emotions and all of them have their functions. And all of them might also need you to handle them differently. Therefore it’s important to get down to the core.

And then you also need to accept and appreciate all those emotions because emotions are neither good nor bad. They just gain connotation through society.

Take, for example, grieving or sadness. Why do we so desperately try to cut it out of our lives, because actually it’s just a very beautiful illustration of the appreciation that we have for someone or something.

Now I approach all three steps by writing my emotions down in a journal just for that on need basis, so not necessarily daily but sometimes only every few weeks or maybe even only every few months. Friends of mine do similar things with apps if you want to be more modern.

And then there is the next step: reflecting on your emotions and their origin because sometimes just knowing why we feel the way you do already helps us handle the feeling. Again for me covered when I write them down because it gives me time to actively think about them.

And then you get to handling your emotions because that’s what it’s all about; isn’t it?

And after that, reflecting might already suffice. But it might not. And you may still need to find your way on how to handle your emotions, because there is more than one way to skin a cat and I can only give you a few examples of what I did.

And what helped me, if not handled emotion but at least find out how to handle it was writing it down, because it put distance between me and my emotions. 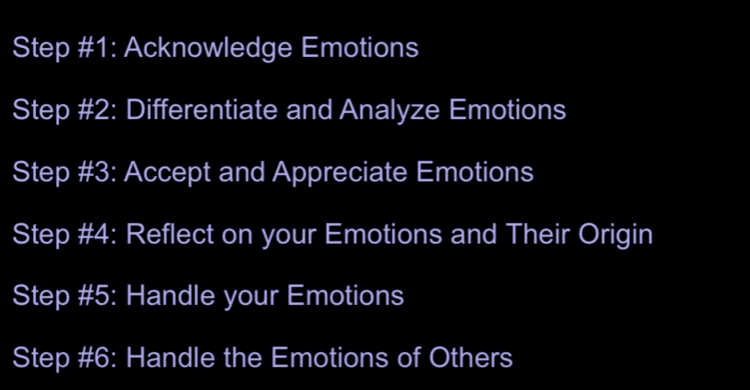 There has even been a study conducted on the positive effects of written expression of emotions by Pennebaker and Smyth and they published it in their book: Opening Up by Writing It Down, if you want to check it out.

Because that’s actually another thing that I do. I read on the topic. Currently I’m reading Language of Emotions by Karla McLaren. Literally any book by Brené Brown is good to go but there are so many more.

And then when we have a few people being emotionally intelligent, we also need to think about how can we teach our next generation. And as a society I feel the most important thing that we need to do is implement emotional education in school.

Teach children about the different emotions and their functions. Give them a space to openly talk about them so that they can acknowledge their emotions. Help them to accept and appreciate them.

To be honest, it’s not that difficult. Most of the things that I mentioned can be easily put into practice in schools. I mean, how many books have you read in school? Why not make some of them about emotional intelligence, or make kids work on case studies together so that they can exchange their ideas on how to approach topics.

And if we’re lucky, they get out of school having learned this fundamental and crucial skill of emotional intelligence. Imagine the world that we would be living in.

If every one of us was emotionally intelligent, what do you think would change? Being emotionally intelligent means knowing and understanding yourself. Thus it helps you make better decisions; it would spare us from emotional suffering because we know where it comes from, and we know how to handle it. And maybe not even impose it upon others.

Just imagine in the world that we will be living in — a world full of mutual understanding, acceptance, tolerance and connection — a truly inclusive world. How awesome would that be?