Now what I tell you next is the most important part. When these atoms connect to form molecules, they follow a set of rules. Hydrogen makes one bond, oxygen always makes two, nitrogen makes three and carbon makes four. That’s it. HONC — one, two, three, four.

If you can count to four, and you can misspell the word “honk,” you’re going to remember this for the rest of your lives.

Now here I have four bowls with these ingredients. We can use these to build molecules. Let’s start with epinephrine.

Now, these bonds between atoms, they’re made of electrons. Atoms use electrons like arms to reach out and hold their neighbors. Two electrons in each bond, like a handshake, and like a handshake, these things are not permanent. They can let go of one atom and grab another. That’s what we call a chemical reaction, when atoms exchange partners and make new molecules.

The backbone of epinephrine is made mostly of carbon atoms, and that’s common. Carbon is life’s favorite structural building material, because it makes a good number of handshakes with just the right grip strength. That’s why we define organic chemistry as the study of carbon molecules.

Now, if we build the smallest molecules that we can think of that follow our rules, they highlight our rules, and they have familiar names: water, ammonia and methane, H20 and NH3 and CH4.

The words “hydrogen,” “oxygen” and “nitrogen” — we use the same words to name these three molecules that have two atoms each. They still follow the rules, because they have one, two and three bonds between them. That’s why oxygen gets called O2.

I can show you combustion. Here’s carbon dioxide, CO2. Above it, let’s place water and oxygen, and beside it, some flammable fuels. These fuels are made of just hydrogen and carbon. That’s why we call them hydrocarbons. We’re very creative.

So when these crash into molecules of oxygen, as they do in your engine or in your barbecues, they release energy and they reassemble, and every carbon atom ends up at the center of a CO2 molecule, holding on to two oxygens, and all the hydrogens end up as parts of waters, and everybody follows the rules. They are not optional, and they’re not optional for bigger molecules either, like these three.

This is our favorite vitamin sitting next to our favorite drug, and morphine is one of the most important stories in medical history. It marks medicine’s first real triumph over physical pain, and every molecule has a story, and they are all published. They’re written by scientists, and they’re read by other scientists, so we have handy representations to do this quickly on paper, and I need to teach you how to do that.

So we lay epinephrine flat on a page, and then we replace all the spheres with simple letters, and then the bonds that lie in the plane of the page, they just become regular lines, and the bonds that point forwards and backwards, they become little triangles, either solid or dashed to indicate depth. We don’t actually draw these carbons. We save time by just hiding them. They’re represented by corners between the bonds, and we also hide every hydrogen that’s bonded to a carbon. We know they’re there whenever a carbon is showing us any fewer than four bonds.

The last thing that’s done is the bonds between OH and NH. We just get rid of those to make it cleaner, and that’s all there is to it. This is the professional way to draw molecules. This is what you see on Wikipedia pages.

It takes a little bit of practice, but I think everyone here could do it, but for today, this is epinephrine. This is also called adrenaline. They’re one and the same. It’s made by your adrenal glands. 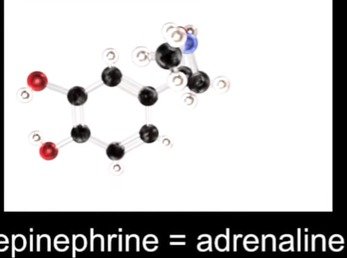 You have this molecule swimming through your body right now. It’s a natural molecule. This EpiPen would just give you a quick quintillion more of them. We can extract epinephrine from the adrenal glands of sheep or cattle, but that’s not where this stuff comes from.

We make this epinephrine in a factory by stitching together smaller molecules that come mostly from petroleum. And this is 100% synthetic. And that word, “synthetic,” makes some of us uncomfortable. It’s not like the word “natural,” which makes us feel safe.