But these two molecules, they cannot be distinguished. We’re not talking about two cars that are coming off an assembly line here. A car can have a scratch on it, and you can’t scratch an atom. These two are identical in a surreal, almost mathematical sense. At this atomic scale, math practically touches reality.

And a molecule of epinephrine it has no memory of its origin. It just is what it is, and once you have it, the words “natural” and “synthetic,” they don’t matter, and nature synthesizes this molecule just like we do, except nature is much better at this than we are.

Before there was life on earth, all the molecules were small, simple: carbon dioxide, water, nitrogen, just simple things. The emergence of life changed that.

Life brought biosynthetic factories that are powered by sunlight, and inside these factories, small molecules crash into each other and become large ones: carbohydrates, proteins, nucleic acids, multitudes of spectacular creations.

Nature is the original organic chemist, and her construction also fills our sky with the oxygen gas we breathe, this high-energy oxygen. All of these molecules are infused with the energy of the sun. They store it like batteries. So nature is made of chemicals.

You can’t have chemical-free lump charcoal. That is ridiculous. And I’d like to do one more word.

The word “natural” doesn’t mean “safe,” and you all know that. Plenty of nature’s chemicals are quite toxic, and others are delicious, and some are both toxic and delicious.

The only way to tell whether something is harmful is to test it, and I don’t mean you guys. Professional toxicologists: we have these people. They’re well-trained, and you should trust them like I do. So nature’s molecules are everywhere, including the ones that have decomposed into these black mixtures that we call petroleum.

ALSO READ:   What is Imposter Syndrome and How Can You Combat It? - Elizabeth Cox (Transcript)

We refine these molecules. There’s nothing unnatural about them. We purify them.

Now, our dependence on them for energy – that means that every one of those carbons gets converted into a molecule of CO2. That’s a greenhouse gas that is messing up our climate. Maybe knowing this chemistry will make that reality easier to accept for some people, I don’t know, but these molecules are not just fossil fuels.

They’re also the cheapest available raw materials for doing something that we call synthesis. We’re using them like pieces of LEGO. We have learned how to connect them or break them apart with great control. I have done a lot of this myself, and I still think it’s amazing it’s even possible. What we do is kind of like assembling LEGO by dumping boxes of it into washing machines, but it works.

We can make molecules that are exact copies of nature, like epinephrine, or we can make creations of our own from scratch, like these two. One of these eases the symptoms of multiple sclerosis; the other one cures a type of blood cancer that we call T-cell lymphoma. A molecule with the right size and shape, it’s like a key in a lock, and when it fits, it interferes with the chemistry of a disease. That’s how drugs work.

Natural or synthetic, they’re all just molecules that happen to fit snugly somewhere important. But nature is much better at making them than we are, so hers look more impressive than ours, like this one.

This is called vancomycin. She gave this majestic beast two chlorine atoms to wear like a pair of earrings. We found vancomycin in a puddle of mud in a jungle in Borneo in 1953. It’s made by a bacteria. 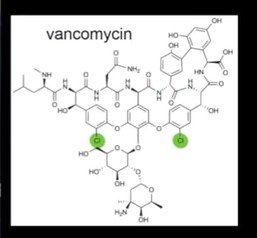 We can’t synthesize this cost-efficiently in a lab. It’s too complicated for us, but we can harvest it from its natural source, and we do, because this is one of our most powerful antibiotics. And new molecules are reported in our literature every day. We make them or we find them in every corner of this planet. And that’s where drugs come from, and that’s why your doctors have amazing powers to cure deadly infections and everything else.

ALSO READ:   I Grew up in the Westboro Baptist Church. Here's Why I Left by Megan Phelps-Roper (Transcript)

Being a physician today is like being a knight in shining armor. They fight battles with courage and composure, but also with good equipment.

So let’s not forget the role of the blacksmith in this picture, because without the blacksmith, things would look a little different. But this science is bigger than medicine. It is oils and solvents and flavors, fabrics, all plastics, the cushions that you’re sitting on right now — they’re all manufactured, and they’re mostly carbon, so that makes all of it organic chemistry.

This is a rich science. I left out a lot today: phosphorus and sulfur and the other atoms, and why they all bond the way they do, and symmetry and non-bonding electrons, and atoms that are charged, and reactions and their mechanisms, and it goes on and on and on, and synthesis takes a long time to learn.