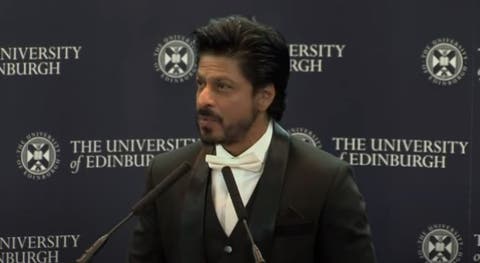 There is no other one around the corner. Develop the faith in it to let it take its own course, make all the efforts you can to abide by its beauty and it will not let you down.

Use every resource you have been given, your mental faculties, the ability of your heart to love and feel for those around you, your health and good fortune: all of the thousands of gifts life has given you to their maximum potential.

Honor your life, please. Honor each gift and each moment by not laying it to waste. There is no real measure of success in this world except the ability to make good of life’s endowments to you.

Sometimes life’s gifts arrive wrapped in all the wrong damned wrapping, at which point we have to learn to do two things with them: recognize them for what they are and gamble on our fear that they might be disasters.

This brings me to my third life lesson inspired by two movies in which I played the anti-hero: Darr and Baazigar.

OK, those stories I won’t tell you. You seem to know them.

Twenty years ago in the movies, roles were very clearly defined. They provided the security of your stardom in a sense. If you’d been successful playing an “angry young man”, you’d pretty much be angry and young for the rest of your career.

If you’d been a police inspector in three movies, odds were, you’d be in the next 33 too. This applied to female stars as well: wives were wives, seductresses were seductresses, mother in laws were mother in laws, and so on and forth.

Few actors would have willingly switched from romantic heroes to obsessively violent lovers. I took the leap…not because I was particularly brave, but because a very dear director friend of mine sat me down and told me I was extremely ugly.

And being ugly necessarily meant – I know, now I know — I do bad guy roles. I wasn’t the romantic hero types, he said, actually he used the words, that my face was not chocolaty enough.

So, I started to eat a lot of chocolate and while waiting for it to take effect, I jumped into bad guy roles. Darr means fear in Hindi and everyone always tells you at speeches like these that you ought to be brave. So I’m not going to bore you with that idea.

Let me just add on behalf of all the fathers of the world who have embarrassed their kids by doing this…it takes a lot of bravery resolve and grit to do it.

So do it. Don’t let your fears become boxes that enclose you. Open them out, feel them and turn them into the greatest courage you are capable of. I promise you, nothing will go wrong.

But if you live by your fears, everything that can possibly go wrong will go wrong and you won’t even have done the Funky Chicken.

While we’re talking about fears and bravery, let me also add this that all the planning in the world won’t take you where you want to go. And it’s fine not to know what you want to be twenty years from now. Most of those who had it all figured out became bankers anyway. Oh, if this goes live on YouTube, my big next loan for the film is finished from my friendly neighborhood banker.

I did a movie once called Kabhi Haan Kabhi Naa, in which I was – one of my favorite films actually — the victim of a lover’s confusions and my next lesson is precisely that.

It’s OK to be confused. Confusion is the route to all the clarity in the world. Don’t worry about it too much and don’t ever take yourself seriously enough to be so clear about your own ideas that you stop respecting other people’s.

You can leave that silliness to my esteemed colleagues and me.

And if you thought the last two stories I told you were crazy, here’s another one in the reckoning for the Oscars for weirdest screenplay: Guddu.

Yes, Guddu was my name in a movie – I hardly look like a guddu but they still named me — about loving and giving in which basically, I have an accident — yes another one — but this time instead of almost wiping out my future mother-in-law, I wipe out my girlfriend’s eyes.