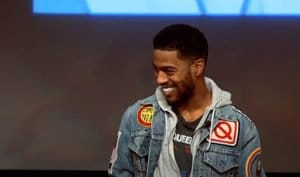 I used to draw all my stuff, I used to draw my tattoos, and that’s it. It was about being a cartoonist until I was about 15, and then I wanted to be a rapper. And then it was all uphill from there.

But you know, if I could really just give people one piece of advice, you know, and just pass this along, and one thing I want you to take from this, is that like, we are all the commanders of our own destiny. You know what I mean?

It’s like you see these movies where we say, that one movie would “Lucy,” where she has 100% of her brain power, and she could do anything she wants. You know, we realize that the average human doesn’t use, what two, three percent. You know what I mean. Some weird, small percentage like that.

I really just told myself just like, “Hey, man, I’m going to do this,” and I applied the information I needed to execute that and in places and at times of my life where I didn’t have the answers, I made sure to get the information or surround myself with people who had the information.

You can’t hang out with people that ain’t doing nothing. How you going to get money hanging out with people that got no money? How are you gonna be inspired by people who aren’t at least trying to go the same way, at least, whether it’s music or schooling, like I would be inspired by all my friends, because I went to college, I went to university to the awful one year for film. It sucked, I hated it, you know. It wasn’t for me.

But my film classes were amazing, and now that I’m doing acting, producing shows, writing shows. I wish I wrote that whole couple, three more years out. Because I would have information that I needed, and I wouldn’t have to go through so many hoops, to be able to direct or create my own film or TV show. Uhmm…. I don’t know what to say… Let me get back on track.

ALSO READ:   Austin Eubanks: What the Columbine Shooting Taught Me About Pain and Addiction (Transcript)

So, really, you know people like I said, come up to me all the time, “Man, what you did made you special, you’re different, and I am not any different from you, you… we are all the same. I came from this town. I went to this school. All my buddies, we all had the same opportunities, you know?

It’s kind of just like having that self-confidence, you know. There was a lot of areas in my personality where I wasn’t as confident, you know? Definitely with the chicks early on. I don’t know if Kendra knows this, but…

But the music, me doing something where I was like, “Wow I made this, my first album,” when that came out, I was like whoa, I made this, this was something I put all of my energy into, and this is out and is released to the world on a professional level, I was so proud of myself. But let’s do it again.

I didn’t have time to be like, “Yeah, my first album, people like it, or OK we did good, it didn’t suck, what are we gonna do again? We got to do another one.”

Then I did that one. OK people liked it, let’s do a third one. You can’t get caught up in just all the other things. You know, I really was like, even still to this day I have my fun, but it’s focused. It’s never, you know, even when I do stray, I’m still working. I’m still writing a song, I’m still doing something. I’m persistent. And that’s also another part.

I believe that some people get lazy. Some people might have that one painting that they started to paint and never finish it. Because they get caught up in their head and oh, I can’t do this, maybe I can do this. It’s like sticking to something. One goal at a time, you know? That was like that’s still big for me.

ALSO READ:   How I Learned to Stop Worrying and Love Discussing Race by Jay Smooth (Transcript)

I never put too much on my plate, you know? At first, it was like music, and then the acting kind of came into play early on, and it was unexpected, but it was a blessing that I was prepared for. I was like I’ve been the class clowns forever. Let’s do this.

And I used to it for free and now I’m getting paid for it. This is great. So you know, I was glad that the guys like my jokes, I was not even a comedian. This is just — you know, just to kind of fast forward, because you know there’s so much I’m trying to squeeze into five minutes.

I remember telling my buddies I am moving to New York. “All right, you’ll be back.” No, I’m not coming back. And if I do come back it’s for concert, you know, and everybody will be like, “Whatever.”