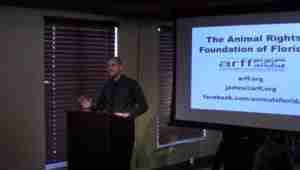 But, what thoughts come to mind when you see the image on the right? Cute, it’s kind of a rigged audience… you are in a vegan restaurant. But you know, when I go to a classroom, half the response, you get half of the kids, “Oh, cute, animal, pig, Wilbur, Babe.”

Now, what would happen if I took one of the pigs living, brought it into the room right here and put him right in front of you? Does that change it? Now what do we see? I mean, what would we think if one of us got up and start chewing on the pig? Not very normal.

If I took a knife, and I sliced that pig in half. And put that under your nose, Now what do you smell? Blood. You smell rotting corpse, bacteria, decomposing flesh. You see there is a process involved, and I am here today, to show you that process of how you convert this animal, into this product.

Why should it be kept a secret? Why should we not know what we are participating in? And what we are putting in our body? Now let’s make the situation slightly more realistic.

If I were to put a pig on this side of the room living, and a butchers knife on the side of that room, how many people would be willing to pick up the knife and take the life of that animal? It’s very rare right? And if somebody did that, that’s all right, but how many people would try to stop that person from doing it? Right. Would we try that? of course, that’s compassion. That is the greatest quality of the human race. There is no other species on this planet that has that level of compassion to extend to all living beings.

Now, if you still see bacon, sausage and ham when I bring a pig into the room, what happens when I change it to… What’s that it supposed to – Here we go. All right. That’s the common response.

Now I never heard anybody say “yumm” nobody ever sees dog, food, hot dog. So, why not? Why don’t we see a food? What? We have been accustomed to view this animal as our pet. I mean, how many of you have a dog, or a cat, right? How many of you have a pig? Not so much. Alright. So…

What I’m concerned with is what is natural to the human species. Because every culture has a different story. But if you take someone from Asia, Africa, South America, North America, Europe, and we are all the same species. We are all human beings. So, let’s take a three-year-old from any country in the world and you put that 3 year old in the room and you line up 5 animals in front of that 3 years old, a pig, a dog, a cow, a cat and a chicken. Do you think the 3 year old will going to know which one to eat and which one to pet? What’s the 3 years old most likely going to do? Or try to do? Play with them all. He is going to try to play with them all. The 3 years old has to be taught, “no, no, no, no, don’t play with him, eat him, play with him, pet him.” That’s what we were taught. We didn’t choose our diet. Our diet is a learned behavior.