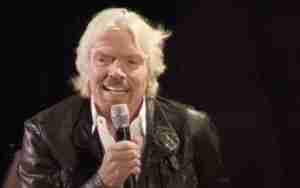 And I think, you people got time here to think about when they get out, do they have a hobby? What could they do to make other people’s lives better? And so possibly, rather than working for somebody else people here could actually start a business when they leave. And start in a small way.

I started literally in a really small way. Like handing our leaflets outside — outside concert halls and selling music. Getting the money in from the leaflets and then sending the music out. Just one thing led on to another. So you don’t have to dream big straight away, just try to get the nuts and bolts of your business going.

Scott Budnick: Great. Sitting in this room today we have a lot of the decision makers in the Governor’s office and the Department of Corrections who are really guiding this system. And working with them I know that they really believe strongly in turning people’s lives around. But there’s obstacles, political obstacles. A recidivism rate of around 60%, 74% if you’re 18 to 25.

If you’re spending billions of dollars and failing 7 out of 10 times I’m sure you would shut that company down really quickly. As a business man and a concerned human being what advice would you give to lawmakers and decision makers about how to run this differently?

And we’ve spent two years looking at the war on drugs. And by the way, the reason that I’m going straight to drugs is that so many people in American prisons started because of some element of the drug problems.

So as a businessman, what we did was we went and looked at other countries. We looked to see whether anybody else was doing it better. Portugal had a major drug problem. And 12 years ago a very forward thinking president said, “We’ve got it all wrong. If somebody has a drink problem we help them. If somebody smokes too many cigarettes we do our best to try and help them stop smoking too many cigarettes.

What’s the difference between that and other drugs?” They said okay, we’re not going to lock anybody up ever again for taking any kind of drugs. What we’re going to do is help them.

So learning from that, the National Drug Commission are urging countries all over the world to treat drugs as a health problem not a criminal problem. Someone like Russia, draconian treatment of people on drugs. They’ve got the biggest HIV problem in the world.

If you give people clean needles you can make sure they don’t contract HIV. There are so many benefits I think of taking that approach.

So, now I really want to open it up to you guys, specifically the inmates in the audience. Let’s now open it up for anyone that wants to ask Sir Richard Branson a question.

Richard Branson: I’ll tell you what the first prisoner to ask when they get out they can get a free ticket to London.

Richard Branson: All right, we’ve got over here.

Inmate1: Hello mister Richard. Thank you for coming. My question is what inspired you or gave you the heart to hire an ex-convict?

Richard Branson: I think – we were talking about this earlier and I think — What’s surprising is just that not more people are doing it. The people in this room could be my children. They could be myself. They could be my brothers, my sisters.

ALSO READ:   I Was Human Trafficked for 10 Years. We Can Do More to Stop It: Barbara Amaya at TEDxMidAtlantic (Transcript)

And instead, in America when people come out of prison they continue to be punished. They can’t get food stamps or I think getting mortgages and other things are difficult. Which puts people on a path to re-offending again. And it works. Some of our best employees at Virgin are people who’ve been in prison, including myself.

Inmate2: Mister Branson, Mister Budnick thank you. I’m a parent. I have 3 children. I’ve been in prison for 19 years now. And the biggest difficulty that we face is communication between myself and my children.

This is 2014 and the world is changing technologically. Have you ever considered tying together social good with an entrepreneurial opportunity to bring modern day communications to prisoners to help between prisoners and their children?

Richard Branson: Well, I hadn’t considered it until you just mentioned it. A lot of the best ideas come from discussions like this. It must be incredibly tough for all of you in this prison. It’s so far from anywhere. For families to have to leave to come and live close to you is heart wrenching for them and the kids. And obviously a lot of families will not — will not leave wherever they are to come and live close to you. So it must be horrendous.

I would urge the warden who’s very liberal minded thinking to maybe work with you in trying to come up with a program that maybe could be an example to other prisons in the years to come. If we can help a bit we would love to try to help a bit within whatever we’re allowed. I can see how important it is.