Now probably, most of those passengers just thought, “It’s a fact of life, he’s got to open the window to clean it. That’s just how it is.” But Mary didn’t.

Mary thought, “What if the diver could actually clean the windshield from the inside so that he could stay safe and drive and the passengers could actually stay warm?” So she picked up her sketchbook right then and there, and began drawing what would become the world’s first windshield wiper.

Now as a product designer, I try to learn from people like Mary to try to see the world the way it really is, not the way we think it is. Why? Because it’s easy to solve a problem that almost everyone sees.

But it’s hard to solve a problem that almost no one sees. Now some people think you’re born with this ability or you’re not, as if Mary Anderson was hardwired at birth to see the world more clearly.

That wasn’t the case for me. I had to work at it. During my years at Apple, Steve Jobs challenged us to come into work every day, to see our products through the eyes of the customer, the new customer, the one that has fears and possible frustrations and hopeful exhilaration that their new technology product could work straightaway for them. He called it staying beginners, and wanted to make sure that we focused on those tiny little details to make them faster, easier and seamless for the new customers.

So I remember this clearly in the very earliest days of the iPod. See, back in the ’90s, being a gadget freak like I am, I would rush out to the store for the very, very latest gadget. I’d take all the time to get to the store, I’d check out, I’d come back home, I’d start to unbox it.

ALSO READ:   DESSA: Can We Choose to Fall Out of Love? (Transcript)

And then, there was another little sticker: the one that said, “Charge before use.” What! I can’t believe it! I just spent all this time buying this product and now I have to charge before use. I have to wait what felt like an eternity to use that coveted new toy. It was crazy.

But you know what? Almost every product back then did that. When it had batteries in it, you had to charge it before you used it.

Well, Steve noticed that and he said, “We’re not going to let that happen to our product.”

So what did we do? Typically, when you have a product that has a hard drive in it, you run it for about 30 minutes in the factory to make sure that hard drive’s going to be working years later for the customer after they pull it out of the box.

What did we do instead? We ran that product for over two hours. Why? Well, first off, we could make a higher quality product, be easy to test, and make sure it was great for the customer.

But most importantly, the battery came fully charged right out of the box, ready to use. So that customer, with all that exhilaration, could just start using the product. It was great, and it worked. People liked it.

Today, almost every product that you get that’s battery powered comes out of the box fully charged, even if it doesn’t have a hard drive. But back then, we noticed that detail and we fixed it, and now everyone else does that as well. No more, “Charge before use.”

So why am I telling you this?

Well, it’s seeing the invisible problem, not just the obvious problem, that’s important, not just for product design, but for everything we do.

You see, there are invisible problems all around us, ones we can solve. But first we need to see them, to feel them. So, I’m hesitant to give you any tips about neuroscience or psychology. There’s far too many experienced people in the TED community who would know much more about that than I ever will.

But let me leave you with a few tips that I do, that we all can do, to fight habituation. 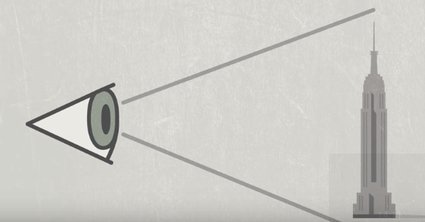 Maybe you can remove them altogether to make that better. Take thermostats, for instance. In the 1900s when they first came out, they were really simple to use. You could turn them up or turn them down. People understood them.

But in the 1970s, the energy crisis struck, and customers started thinking about how to save energy. So what happened? Thermostat designers decided to add a new step. Instead of just turning up and down, you now had to program it. So you could tell it the temperature you wanted at a certain time. Now that seemed great.