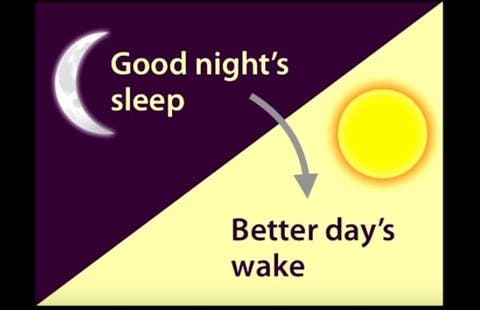 The Science of Sleep and the Art of Productivity: Dr. Matthew Carter (Transcript)

In our public life, it’s really not uncommon to see people dozing off, and in general, in our public and professional lives, people really just look exhausted.

But something is even crazier than that to me, which is that not only are people exhausted, but some people choose to be sleep-deprived and some people actually wear it as a badge of honor, right?

I’ve actually been a part of job committees where job applicants will brag about the fact that they only get three or four hours of sleep a night.

And actually, just a couple of months ago, I was looking at Facebook, and one of these memes that somehow just shows up in your feed for no reason, I read it — it had tens of thousands of likes, and it said, “No one looks back on their life and remembers the nights they had plenty of sleep,” the implication being that if get plenty of sleep, you’re somehow missing out on your life’s greatest potential and in all the things that you could be doing.

And so, this is really interesting to me, and I wonder, actually, if people would brag about the fact that they’re not getting enough sleep if they knew that the health benefits of getting sleep were just as important as the benefits of not smoking or the benefits of eating good nutrition and not eating junk food.

Sleep scientists have made so many great discoveries over the past 10 years, and I’m surprised that more people don’t know about them.

So here’s just a couple examples, and you’ll have to excuse me because I’m a biology professor. So when you’re sleeping, your pituitary gland, which is right below your brain, surges its production of growth hormone.

How many people would take a pill that caused muscle growth, bone growth and fat metabolism? If there was a company that sold this pill, they’d make billions of dollars, and I imagine most consumers would pay a lot for this. And yet, we get it for free when we’re sleeping.

And it’s always odd to me when I see people working out at the gym, and they spend hours a day at the gym and then they say they don’t get enough sleep at night. It’s kind of a funny thing to me: you know your muscles aren’t actually growing when you’re working out, or you’re not losing weight. That all happens when you’re sleeping, and I don’t think most people know that.

Here’s another example: the cells and the biochemistry — the biochemicals that make up your immune system and circulate through your blood stream, they actually change when you’re sleeping compared to when you’re awake.

And when you’re sleeping, they’re particularly good at seeking out viruses, bacteria and other microorganisms to stop infection and disease. And this is why, when you don’t get enough sleep, you’re much more prone to getting sick. And that’s why, when you’re sick, the best thing you can do is to get a good night’s sleep.

And so, in addition to these health benefits of sleep, people who don’t get enough sleep are at a higher risk for high blood pressure, heart disease, diabetes, obesity.

Psychologically, people are at a much higher risk for anxiety and depression. We all know that when you are sleep-deprived, you lose focus, you lose the ability to pay attention. And it’s been estimated by the National Sleep Foundation that over $60 billion is lost in the United States annually just due to unproductive workers, because they’re so sleep-deprived.

ALSO READ:   How to Love Yourself to the Core: Jen Oliver (Transcript)

And all of this is really important, but I think it also ignores something that we all know, everybody in this room knows to be true, which is that it really sucks to be sleep-deprived, right?