Listen to the MP3 Audio: Why is organic food so #@! expensive by Ali Partovi @ TEDxManhattan

I’ve invested a lot of my own money into organic and sustainable farming, into converting American farmland to organic. And I’m here to dispel some misperceptions about organic food.

There’s this prevailing notion that organic farming is more expensive and less efficient, right, and that we need industrial agriculture and factory farms to feed the world.

Well, I’m here to dissect some of the assumptions behind that logic and to share some information that leads to a very different conclusion.

We all know that organic food is expensive. This is a fact, and it’s logical to therefore assume that it’s for the 1%, the foodie elites, the rich people, not for ordinary people. Well, that’s actually not correct logic and I’ll show why in a second.

It also leads us to assume that if organic food is expensive, organic farming must be more expensive, which then leads to wonder surely it can’t feed the world and back to concluding that it’s only for the 1%. Well those assumptions actually are wrong as well.

Think about it. If you’re a business person or a politician, the way to be successful is to come up with products or policies that cater not to the 1% but to ordinary Americans. And so we need businessmen and policymakers to recognize that organic food is not just for the 1%; it’s for everybody. It’s for ordinary Americans. And the first step in that change is to change that perception.

So who is buying this expensive organic food? Who in America is buying it?

Well, according to Nielsen and NMI Research, three out of every four Americans have consciously chosen to buy organic food in the past year. Now some of them might have only bought a single organic product but there is a subsets that are so-called devoted organic shoppers, that represent the vast majority of all organic food consumption in this country. These so-called foodies are not 1%; they’re 25%, one out of every four Americans. 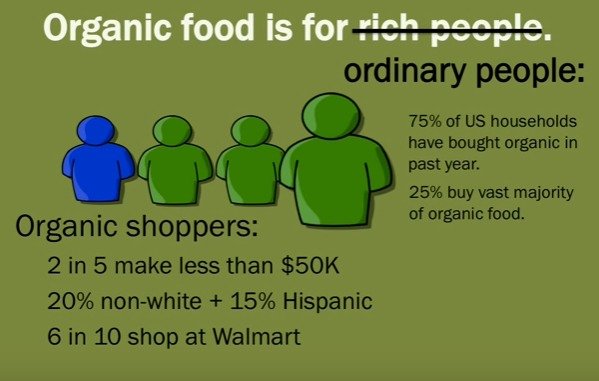 ALSO READ:   Want to Improve Your Memory - Do This Everyday: Krishan Chahal (Transcript)

In every respect the foodie elite who are buying organic are the average ordinary American. And it’s one out of four Americans and they’re doing — they’re already buying organic in spite of how expensive it is. Just imagine how many more Americans would be buying organic food if it wasn’t so damn expensive.

Well, we actually know some of the answer to that. Walmart asked its consumers and found that 91% of them would be buying organic.

So why is organic food so darn expensive?

It must be because organic farming is more expensive, right? Not true. Organic farming actually saves a ton of money on a lot of very expensive inputs. Fossil fuel is expensive; fertilizers are incredibly expensive. The chemicals or the antibiotics that are used by factory farms — these things are very expensive, not just their externalized costs but their actual dollar costs are very high.

Well, so maybe organic farming saves money but perhaps it produces less food. That’s not necessarily true either. Now this is not a blanket statement; it varies by crop and region. But there are a lot of ways in which when done right organic sustainable farming can produce more food.

One part of that is crop and livestock rotations, so that nutrients are recycled into the soil. Growing multiple crops at the same time, increasing the revenue of the land.

Exploiting natural synergies. One of my favorite examples of this is sheep and asparagus. Sheep love to graze but they do not like the taste of asparagus. And so when the asparagus farmer has a weed problem rather than spending a lot of money buying a chemical herbicide to spray in the field, they can invite in a sheep farmer, the sheep will clear the weeds. The sheep farmer gets free pasture for his or her animals and the asparagus farmer gets free weed control. And the sheep add fertility to the soil.

You must be thinking, well great but industrial agriculture for all of its ills surely at least the one thing it has is that it’s more efficient, right? I would say that it has the illusion of efficiency, and it’s a short-lived one. For example, think about the topsoil. America’s topsoil, perhaps the single greatest national treasure this country possesses, this rich topsoil is like a bank account that we’re drawing on every year, withdrawing money not putting it back in. That’s not efficient; it’s inefficient and unsustainable.

Similarly the way we treat nutrients. Nutrients are supposed to come from the soil, go through the body of a plant, into the body of an animal and back into the soil. We all learned that in high school. And that’s not how the vast majority of North American agriculture works today.

Instead we’re mining minerals in Morocco, shipping them across the Atlantic, spraying them on the fields only to have them wash off into the waterways and end up in dead zones in places like the Gulf of Mexico. That’s not efficient. It’s incredibly wasteful, not just ecologically but economically.

Similarly, what I said earlier about fossil fuels, antibiotics to feed the factory farm animals, and all of this to increase the yield of corn and soy — crops that humans don’t even actually eat. We’re maximizing the yield per acre of corn and soy, yet the vast majority of American farmland does not feed humans. Either it’s used to create ethanol or to feed livestock.

ALSO READ:   How to Open Up The Next Level of Human Performance: Steven Kotler (Full Transcript)

About less than 10% of the corn crop in this country actually to feed humans. This is the system that is supposed to feed the world. Well, it’s actually not feeding the world today. If you measure — the right way to measure productivity in agriculture is not yield of corn per acre or soy per acre but the yield of human food per acre.

And when you measure how much human food is produced per acre, America is not a leader. We’re not even average. We’re behind the world average, and we’re behind countries like India and China that are doing a much better job of feeding the world population than we are.

So if you’re smart, you’d realize what’s really behind that stat is the fact that these other countries consume less meat than America does.

And so who’s going to produce all of the increasing appetite for pork in China and surely American industrial agriculture and factory farms are going to step forward to supply all the meat.

Well, I’m not sure that’s true either. The leading exporter of pork in the world today is Denmark. Denmark is a country that has for many years banned the use of sub-therapeutic antibiotics in livestock. One of the most disgusting and reckless practices of American factory farms has been banned in Denmark. Yet Denmark has continued to maintain high yields and low prices for their pork and is the number one exporter of pork to places like China.

Ironically, China has recently banned pork imports from several US pork producers because of the use of antibiotics.

The real question though is what’s the most efficient way to produce food if people are going to eat more meat?

Well, if you look at one acre of corn, one acre it can produce about enough corn to feed one head of cattle. This is an approximation, this is not very exact math. That same acre I wouldn’t advocate planting organic corn to feed the cattle, that same acre can produce about enough grass to feed one head of cattle. Now it’s not an exact math. I’m approximating and there’s a lot of other things that change the equation.

Corn is a more efficient crop in a lot of ways. It’s a wonderful crop. It allows for a lot more control. It has less seasonality but it also has a lot of other costs on the balance sheets. At the end of the day it’s not a slam dunk that industrial agriculture is more efficient even for producing meat.

Now the truly more efficient way to feed humans is to use that land to produce crops that people eat like fruits, vegetables, wheat or rice. But the benefit of growing meat on pasture is at least those animals fertilize the land and if you do a rotation between those animals and the fruits and vegetables, you can actually produce more off that same land.

It must be about the money then, right? These so-called evil corporations like McDonald’s and Monsanto. Perhaps they’re shoving this industrial food down our throats because it’s more profitable, right?

Well, that’s actually not true either. In fact, using the techniques I just described, Farmland LP which I’m a very large investor in, converts farms from conventional crops to organic and significantly increases their profits. If you look at — they’ve done a cohort analysis of farms — farmland that they’ve been progressively converting to organic and in doing so significantly raising the income from the land, from something like $100 per acre to $450 per acre.

You might think well that’s great but perhaps it can’t scale. Well the answer is actually organic and sustainable agriculture is scaling. For one thing, Chipotle which is the closest we have to fast food organic company is the single fastest growing fast food company of the past decade. And more broadly organic cropland in the United States has grown tremendously, more than tripling in less than two decades.

So organic saves money, is less expensive, can produce as much or more food, is more profitable and is scaling.

One out of every four Americans is a devoted organic shopper, and 91% of Walmart customers say they would be interested in buying organic food. The demand that we need to satisfy is not just that 5%. 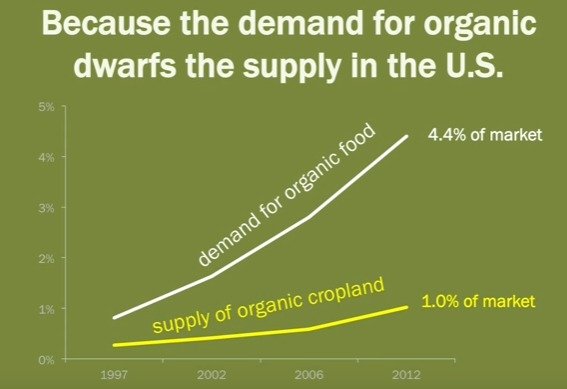 So the poor countries of the world are feeding the food that the majority of Americans want to eat. So I think America should stop worrying so much about feeding the world and focus a little bit more on feeding itself. The solution to this is actually relatively simple. We need organic sustainably managed cropland in this country to increase dramatically to catch up with the enormous demand.

I’ve put my own money where my mouth is and I’ve invested a lot of money in Farmland LP as I mentioned which is converting land to organic. And I think we need both policy change and more business innovation to accelerate the expansion of sustainable organic agriculture in America.