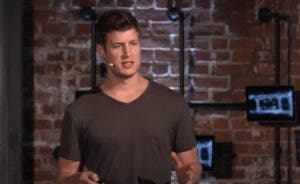 Here is the full text of Max’ talk titled ‘Dementia is Preventable Through Lifestyle. Start Now.’ at TEDxVeniceBeach conference.

Hi everybody. I want to begin with a quick little exercise if you will indulge me.

And I want you to picture somebody that has dementia. Okay, what does the term “dementia” evoke for you? Maybe you have a relative with the disease. Maybe you’ve seen a documentary recently. There’s no right or wrong answer.

Just get that image in your mind’s eye.

Now I want you to open your eyes, and if the image you had in your head looks something like the person you see on the screen in front of you, I want you to raise your hand. All right, that’s quite a bit of people.

Now I want you to raise your hand if the image you had in your head looks somebody like the person that you see on screen now. Okay. Much less people.

This is my mother. And her name is Kathy, and she has dementia, and I love her very much. And when I had to come to terms with the fact that my mom was showing the initial signs of memory loss in her 50s a couple of years ago, it was an incredibly traumatic experience for me. And it’s still, to this day, incredibly heartbreaking to have to acknowledge.

But because I couldn’t chalk up what I was seeing in my mom to typical aging – clearly she’s not the picture of a person succumbing to the ravages of time – I decided to learn all that I possibly could about the ways diet and lifestyle mediate risk for neurological disease, brain health, and ultimately brain function itself.

Now, what I learned shook me to my core.

You see, I thought, like you guys, that dementia was an old person’s disease. You see, not only is dementia not a normal aspect of aging, but it begins in the brain decades before the first symptom of memory loss.

If you make it to the age of 85, you have a one in two chance of being diagnosed with Alzheimer’s disease. That’s 50%; those odds are not very good.

And unfortunately for my generation, millennials, we’re the first generation in history that’s going to reach the age of 90, according to the Stanford Center on Longevity.

Now, I think I speak for many millennials when I say that generally we believe science has our back, right? Ninety is a long ways from now. By the time I get to that age, we’re going to have some kind of pharmaceutical cure – ultimately, not something I have to worry about.

Well, unfortunately, Alzheimer’s drug trials have a near 100% failure rate. Let that figure sink in, okay? That’s worse than the failure rate for cancer drugs.

I mean, those are dismal statistics. Therefore, unless we can prevent this disease, one in two millennials will have it, which is pretty heartbreaking.

For the past century, the conversation surrounding Alzheimer’s disease, the most common form of dementia, has been one dominated by doom and gloom. That’s because since 1906, when Alzheimer’s disease was first coined and named by the physician Alois Alzheimer, 90% of what we know about the disease has been discovered only in the past 15 years. So that is to say, this is a rapidly evolving field of science.

And while we don’t yet have all the answers – there’s still no cure; I wish we had a cure – we do have enough information to say that today, for a significant proportion of people, it is a potentially preventable disease.

Here we have a statement written in 2014 by 109 leading scientists and clinicians around the globe stating very plainly that in 2014, we had enough evidence to say that dementia and Alzheimer’s disease is a preventable disease.

And just this year, for the first time, at the Alzheimer’s Association’s International Conference, it was acknowledged that one third of dementia cases may be preventable. Depending on what literature you review, even more may be preventable as well. This is just the statistic that was most recently published in the journal Lancet, which is one of the top medical journals in the world.

And here we have coverage from that same event alluding to the notion that a field is now looking for hope in an area once thought impossible.

Now, when it comes to our diets and our lifestyles, and their impact on our health, it’s been said that our genes load the gun while our choices pull the trigger. So I became obsessed with trying to understand what it is about the modern world that makes it so likely for our choices to pull the trigger on diseases like Alzheimer’s disease.

So I did a deep dive into the literature. And I looked at parts of the world, like in Ibadan, Nigeria, home of the Yoruba people.