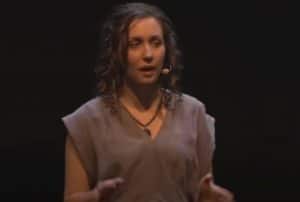 Kristin Rivas: The Life-Changing Power of Words at TEDxRainier (Transcript)

Here is the full transcript of hypnotherapist Kristin Rivas’ TEDx Talk Presentation: The Life-Changing Power of Words at TEDxRainier conference. This event occurred on November 9, 2013 in Seattle at TEDxRainier.

Listen to the MP3 Audio: The life-changing power of words by Kristin Rivas at TEDxRainier

Could your life forever be changed in an instant through the impact of one sentence? By just one idea? Isn’t that why you’re here to have your mind blown by at least one idea worth spreading?

Reminds me of a quote from one of my favorite movies. It’s a story about a man named Cobb. This character played by Leonardo DiCaprio is a skilled dream invader who gets paid to extract people’s secrets while they sleep. Cobb is offered a chance to regain the life he once lived as payment for a task considered to be impossible: Inception and planting an idea in someone’s mind. Cobb says: “What is the most resilient parasite on earth? Bacteria? Virus? An intestinal worm? An idea. Resilient, highly contagious. Once an idea has taken hold of the brain, it’s almost impossible to eradicate. An idea that is fully formed, fully understood that sticks right in there somewhere.” A single idea from the human mind can build cities, transform the world and rewrite all the rules.

Professionally speaking, as a hypnotist, I am intimately familiar with the skill, the science, the arts on the inception of ideas. I use the power of words as suggestions to help your mind adopt an idea or a belief. What you picture or imagine as I speak and how you react to the words I use can give you the transformations you’re wanting.

Personally speaking as somebody who has been a subject, I’m intimately familiar with the desperate search for a transformation.

I’d like to tell you about a sentence that changed my life. Two sentences actually. The first sentence changed my life for the worst. In fact, the impact of just those four words haunted me so severely, their effects caused me to become a college dropout, attempt suicide and wear helmet having to use a wheelchair to get around because I became an invalid.

The second sentence changed my life for the better. The second sentence is why I’m able to stand here speaking in front of you today as a happy, healthy professional sane person. As you listen to my story, you can understand the totality of what I mean, and believe me when I say that your life can be radically changed in an instant through the power of words.

When I was 18, a freshman in college visiting home one weekend, my dad woke me up from my sleep to give me the news, that dreadful life-changing sentence. My older sister Bethany, by just 15 months had been in a car accident: the driver had been drinking. The next four words my dad spoke to me slammed into my awareness with such sudden shock I became shattered in the wake of ensuing devastation. Bethany didn’t make it.

The impact of that crash and those words on my life, on my psyche it wasn’t just immediate; it was ongoing. I didn’t consciously realize it then but the idea that began to overtake my mind upon hearing of my sister’s death was this: what happened to my sister was not OK, nothing could ever make it OK. I could never be OK with it. Therefore I could never be OK. You may be able to imagine or relate in some way to how I felt.

Fast-forward it to few years later. It’s my senior year of college and I’m a newlywed. I’m folding laundry when all of a sudden everything looks blurry, I start having double vision, I hear ringing in my ears; my tongue feels swollen and numb, a mental fog comes over me, I pass out.