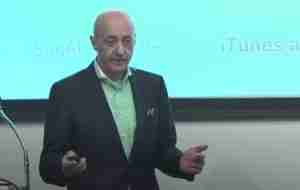 No, wait. Secondary smoking kills. It causes lung cancer. I know that, because in 1986, when the US Surgeon General told us, what did we do? We waged massive campaigns. We started labeling packages saying, “It kills.”

We also started public campaigns, so the kids would know. And what happened is one day, they would tell you, “Mom, if you don’t stop smoking, you’re going to die.”

Well, that’s pretty dramatic. This is a public health emergency. And we have one today. It’s all about secondary sugar, and let me explain how it kills.

You all know primary sugar, right? Primary sugar: what I call that is the one in your fruits, your vegetables, the legumes, the nuts, the milk; it’s the lactose, this is all good for you. The body knows how to process that very well with all the protein, the fiber, and the vitamins that come with it.

What I call secondary sugar — and I coined this term — is the sugar that is hidden and added to processed foods. That’s the one that’s bad.

You may say, “But, I only eat a few of those.” Yes, a serving size is five crackers. Do you know anybody who eats five crackers? Five chips? I don’t. Right? They eat the whole sleeve. That’s teaspoons of sugar. And it’s everywhere. When I say everywhere, I mean in your bread, in your pizza, in your burgers. It’s in your salad dressing, even in America’s favorite hot sauce. You are reading these numbers correctly: there are 24 teaspoons of sugar in that bottle. Yes. The regular bottle.

After working 20 years in the industry, I thought I had seen the best and the ugliest of the industry. No. A few weeks ago, I found out even worse. And that’s what I want to share with you today.

Now, let’s put baby formula in perspective here. The best milk for the baby is obviously the mother’s milk, breast milk. It does have sugar. Primary sugar in it. 7% of it is lactose, and that’s good. Can’t be better for the baby.

But, in many communities, in low-income communities, they use this — 50% of the mothers don’t breastfeed. And, what’s in this? Less lactose and a lot of sugar. When I say a lot of sugar, I mean 61 teaspoons of sugar is like this. That’s crazy. It’s shocking.

Now, it goes on as an addiction. And now a three-year old toddler will get a little beverage like this. Let me show the size of this bottle. It has six teaspoons of sugar, just that little thing. The marketing is deceiving; because mothers will think, “Oh, my kid will grow like a giraffe!” No, they don’t! They grow like a hippo.

What do we do next? We become young adults, and now we’re tricked by the diets. Think of it for a second. You think about fat-free, right? No, it doesn’t. Again, from knowing in the industry, how it works, when you remove the fat from a product, it’s tasteless, so what do you do? You add sugar, so that your favorite salad dressing, that may already have sugar and you don’t know why, becomes three times as much sugar.

And, you’ll try gluten-free, well, no. I mean, if it’s only because it’s a fad, think again. Gluten-free will often have 30% to 40% more sugar than your regular product. So, you’ll think, “Organic is good for my baby. That’s healthy!” No, it isn’t. The organic baby formula is the worst offender. That’s the one that has 61 teaspoons of sugar. That’s almost half a pound. That’s what I’m talking about. In that little box, there’s this much sugar.

So, what do we do about it? I mean, am I telling you no sugar for anybody? No. I would never say to kids, “Stay away from sugar.” I’m from Paris. I know when I need my sugar kick. And, this is the éclair, right there. The chocolate éclair is what I get for my sugar, because I drink my coffee black. So, that’s my sugar.

But the one on the right has just too much sugar. They look the same. You look at these two little things, and you say, “Oh. It’s about the same.” Yes; 260 calories each. But the difference is one is loaded with sugar. And those nine teaspoons of sugar are like a soda. They create a sugar spike on your liver.