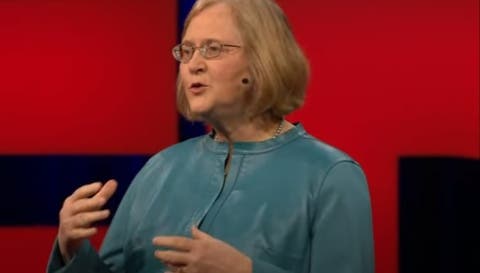 The Science of Cells That Never Get Old: Elizabeth Blackburn (Transcript)

Professor Elizabeth Blackburn is a Nobel Laureate is a leader in the area of telomere and telomerase research.

Here is the full text of her TED Talk titled “The Science of Cells That Never Get Old.”

Where does the end begin?

Well, for me, it all began with this little fellow. This adorable organism — well, I think it’s adorable — is called Tetrahymena and it’s a single-celled creature. It’s also been known as pond scum. So that’s right, my career started with pond scum.

Now, it was no surprise I became a scientist. Growing up far away from here, as a little girl I was deadly curious about everything alive. I used to pick up lethally poisonous stinging jellyfish and sing to them.

And so starting my career, I was deadly curious about fundamental mysteries of the most basic building blocks of life, and I was fortunate to live in a society where that curiosity was valued.

Now, for me, this little pond scum critter Tetrahymena was a great way to study the fundamental mystery. I was most curious about: those bundles of DNA in our cells called chromosomes. And it was because I was curious about the very ends of chromosomes, known as telomeres.

Now, when I started my quest, all we knew was that they helped protect the ends of chromosomes. It was important when cells divide.

It was really important, but I wanted to find out what telomeres consisted of, and for that, I needed a lot of them. And it so happens that cute little Tetrahymena has a lot of short linear chromosomes, around 20,000, so lots of telomeres.

And I discovered that telomeres consisted of special segments of noncoding DNA right at the very ends of chromosomes. But here’s a problem.

Now, we all start life as a single cell. It multiples to two. Two becomes four. Four becomes eight, and on and on to form the 200 million billion cells that make up our adult body. And some of those cells have to divide thousands of times.

So every time a cell divides, all of its DNA has to be copied, all of the coding DNA inside of those chromosomes, because that carries the vital operating instructions that keep our cells in good working order.

So my heart cells can keep a steady beat, which I assure you they’re not doing right now, and my immune cells can fight off bacteria and viruses, and our brain cells can save the memory of our first kiss and keep on learning throughout life.

And think about it like the protective caps at the ends of your shoelace. And those keep the shoelace, or the chromosome, from fraying, and when that tip gets too short, it falls off, and that worn-down telomere sends a signal to the cells: “The DNA is no longer being protected.” It sends a signal: Time to die.

So, end of story.

Well, sorry, not so fast. It can’t be the end of the story, because life hasn’t died off the face of the earth.

So I was curious: if such wear and tear is inevitable, how on earth does Mother Nature make sure we can keep our chromosomes intact?

Now, remember that little pond scum critter Tetrahymena? The craziest thing was, Tetrahymena cells never got old and died. Their telomeres weren’t shortening as time marched on. Sometimes they even got longer.

Something else was at work, and believe me, that something was not in any textbook.

So working in my lab with my extraordinary student Carol Greider — and Carol and I shared the Nobel Prize for this work — we began running experiments and we discovered cells do have something else. It was a previously undreamed-of enzyme that could replenish, make longer, telomeres, and we named it telomerase.

And when we removed our pond scum’s telomerase, their telomeres ran down and they died. So it was thanks to their plentiful telomerase that our pond scum critters never got old.

OK, now, that’s an incredibly hopeful message for us humans to be receiving from pond scum, because it turns out that as we humans age, our telomeres do shorten, and remarkably, that shortening is aging us.

Generally speaking, the longer your telomeres, the better off you are. It’s the overshortening of telomeres that leads us to feel and see signs of aging. My skin cells start to die and I start to see fine lines, wrinkles. Hair pigment cells die.

You start to see gray. Immune system cells die. You increase your risks of getting sick.

In fact, the cumulative research from the last 20 years has made clear that telomere attrition is contributing to our risks of getting cardiovascular diseases, Alzheimer’s, some cancers and diabetes, the very conditions many of us die of. And so we have to think about this.