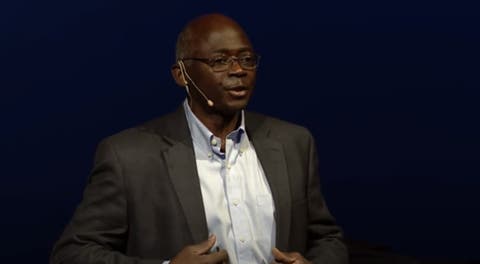 Listen to the MP3 audio while reading the transcript: Winning The Mental Battle of Physical Fitness and Obesity by Ogie Shaw @ TEDxSpokane

Heart disease, cancer, diabetes. One of the things they all have in common is they can be affected by obesity. The first recorded heart attack in this country was in 1896.

In 1896, in this country you had to get exercise to go to the bathroom. Everybody lived on farms. But we got smart.

We start building machines to help us get our work done. We moved to the cities, started pushing buttons for a living and pushing the wrong button could really create a lot of stress. And we started noticing that people starting to die from clogging the arteries.

By the Korean War, half the soldiers, averaging 19 years of age, killed during that war showed significant blockage of coronary arteries.

1956, the Eisenhower administration had a big meeting in Washington DC. The military is noticing something funny starting to happen. It was becoming increasingly difficult to find young American men who could pass the induction physicals for the military. They wanted to figure out who to blame; what’s the problem.

They looked into the public schools, and some researchers had done fitness tests involving the ability of our students at the high school and junior high school level to perform, what they call, functional movements. Just everyday things you might have to do on your job, or in your lives, like can you bend over and you touch your toes, you know?

At 16 years of age, you should be able to put your toes in your mouth. We thought that was the dumbest idea anybody ever came up with the test kids for physical fitness, because we thought the kids are fit just because they’re young.

57.8% of our kids failed that test. We said that can’t be right. If that’s true, we have the most unfit kids in world. And folks, that’s just not possible.

So they decide to take the test of the kids and give it to the kids in Europe. 7% failed.

We came back, started what eventually became the President’s Council on Physical Fitness and Sports. Over 40 years now everywhere you turn, somebody’s going to put you and your kids on exercise programs.

And then we got another bright idea. Why don’t we check to see how fit we’ve become? 40% of us are still enthusiastically avoiding exercise. 50% are exercising and still in lousy shape. About 10% are keeping fit.

University of Indiana measured the fitness level of 4 million kids between 6 and 17 years of age, and found that in the middle of all this hoopla about exercise, 57% of our kids are still failing fitness test. And fitness leaders say they’re worse now than they were 30 years ago.

We’re finding 14 to 19-year old kids with 40% blockage of coronary arteries. What used to be called adult onset diabetes is now showing up in kids between 4 and 10 years of age. They say we’re raising the first generation that will have a shorter life expectancy than either their parents or grandparents. It has never before happened in our history.

The state of Oregon has the highest rate of obesity of any state West of The Rockies. Our public schools are being gutted because of budget cuts. And the first thing we always cut is physical education. They formed an Oregon Health Policy Commission to tell us how to solve this problem. They published a 65-page report which basically said we don’t know.

But they said this: Children’s behaviors are substantially affected by the influential adults in their lives – parents, grandparents, and teachers.

Efforts to address childhood obesity in Oregon will not be successful unless they also include interventions that influence the healthy eating and physical activity behaviors of adults as well as children.

Now they worded this message down a bit in their final draft. But the idea was out.

How many of you get all the exercise you need? And if not, why not?

Well, the two most common objections are — what do you think it is.

Number 2 — and this surprised me how often they stated and how boldly they stated was: I’m too lazy to do it even when I do have time.

Or the way one guy in South Carolina said it: I swear after college I’d never sweat again. Let’s just call it lack of motivation.