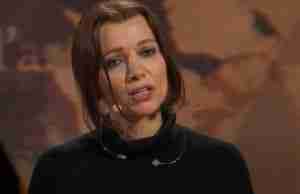 Listen to the MP3 audio: The revolutionary power of diverse thought by Elif Shafak

“Can you taste words?” It was a question that caught me by surprise.

This summer, I was giving a talk at a literary festival, and afterwards, as I was signing books, a teenage girl came with her friend, and this is what she asked me.

I told her that some people experience an overlap in their senses so that they could hear colors or see sounds, and many writers were fascinated by this subject, myself included. But she cut me off, a bit impatiently, and said, “Yeah, I know all of that. It’s called synesthesia. We learned it at school. But my mom is reading your book, and she says there’s lots of food and ingredients and a long dinner scene in it. She gets hungry at every page. So I was thinking, how come you don’t get hungry when you write? And I thought maybe, maybe you could taste words. Does it make sense?”

And, actually, it did make sense, because ever since my childhood, each letter in the alphabet has a different color, and colors bring me flavors. So for instance, the color purple is quite pungent, almost perfumed, and any words that I associate with purple taste the same way, such as “sunset” — a very spicy word.

But I was worried that if I tell all of this to the teenager, it might sound either too abstract or perhaps too weird. And there wasn’t enough time anyhow, because people were waiting in the queue. So it suddenly felt like what I was trying to convey was more complicated and detailed than what the circumstances allowed me to say.

And I did what I usually do in similar situations: I stammered, I shut down, and I stopped talking. I stopped talking because the truth was complicated, even though I knew, deep within, that one should never, ever remain silent for fear of complexity.

So I want to start my talk today with the answer that I was not able to give on that day. Yes, I can taste words — sometimes, that is, not always, and happy words have a different flavor than sad words. I like to explore: What does the word “creativity” taste like, or “equality,” “love,” “revolution?” And what about “motherland?”

These days, it’s particularly this last word that troubles me. It leaves a sweet taste on my tongue, like cinnamon, a bit of rose water and golden apples. But underneath, there’s a sharp tang, like nettles and dandelion. The taste of my motherland, Turkey, is a mixture of sweet and bitter. And the reason why I’m telling you this is because I think there’s more and more people all around the world today who have similarly mixed emotions about the lands they come from.

We love our native countries, yeah? How can we not? We feel attached to the people, the culture, the land, the food. And yet at the same time, we feel increasingly frustrated by its politics and politicians, sometimes to the point of despair or hurt or anger.

I want to talk about emotions and the need to boost our emotional intelligence. I think it’s a pity that mainstream political theory pays very little attention to emotions. Oftentimes, analysts and experts are so busy with data and metrics that they seem to forget those things in life that are difficult to measure and perhaps impossible to cluster under statistical models. But I think this is a mistake, for two main reasons.

Firstly, because we are emotional beings. As human beings, I think we all are like that. But secondly, and this is new, we have entered a new stage in world history in which collective sentiments guide and misguide politics more than ever before. And through social media and social networking, these sentiments are further amplified, polarized, and they travel around the world quite fast. Ours is the age of anxiety, anger, distrust, resentment and, I think, lots of fear.

ALSO READ:   The Sugar Coating on Your Cells is Trying to Tell You Something: Carolyn Bertozzi at TEDxStanford (Transcript)

But here’s the thing. Even though there’s plenty of research about economic factors, there’s relatively few studies about emotional factors. Why is it that we underestimate feelings and perceptions? I think it’s going to be one of our biggest intellectual challenges, because our political systems are replete with emotions. In country after country, we have seen illiberal politicians exploiting these emotions. And yet within the academia and among the intelligentsia, we are yet to take emotions seriously. I think we should.

And just like we should focus on economic inequality worldwide, we need to pay more attention to emotional and cognitive gaps worldwide and how to bridge these gaps, because they do matter.

Years ago, when I was still living in Istanbul, an American scholar working on women writers in the Middle East came to see me. And at some point in our exchange, she said, “I understand why you’re a feminist, because, you know, you live in Turkey.”

And I said to her, “I don’t understand why you’re not a feminist, because, you know, you live in America.” And she laughed.