Listen to the MP3 Audio: Academic research is publicly funded – why isn’t it publicly available by Erica Stone

Do you ever find yourself referencing a study in conversation that you didn’t actually read?

I was having coffee with a friend of mine the other day, and I said, “You know, I read a new study that says coffee reduces the risk of depression in women.” But really, what I read was a tweet.

And that tweet had a link to the “New York Times” blog, where a guest blogger translated the study findings from a “Live Science” article, which got its original information from the Harvard School of Public Health news site, which cited the actual study abstract, which summarized the actual study published in an academic journal. It’s like the six degrees of separation, but with research.

So, when I said I read a study, what I actually read was 59 characters that summarized 10 years of research.

So, when I said I read a study, I was reading fractions of the study that were put together by four different writers that were not the author, before it got to me. That doesn’t seem right.

In a country with over 4,100 colleges and universities, it feels like this should be the norm. But it’s not.

So, how did we get here?

To understand why scholars aren’t engaging with popular media, you first have to understand how universities work.

ALSO READ:   David Baron: You Owe it to Yourself to Experience a Total Solar Eclipse (Transcript)

Now, in the last six years, I’ve taught at seven different colleges and universities in four different states. I’m a bit of an adjunct extraordinaire. And at the same time, I’m pursuing my PhD. In all of these different institutions, the research and publication process works the same way. 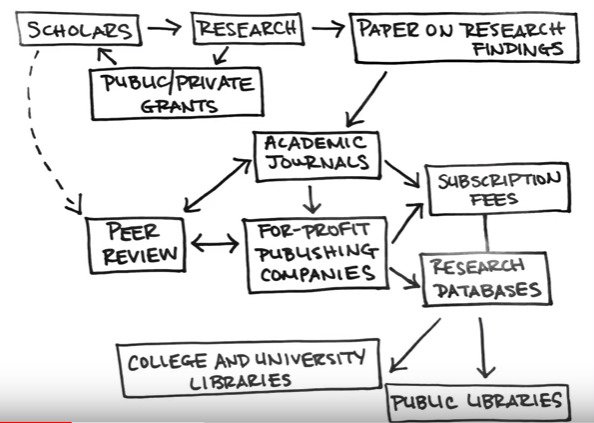 First, scholars produce research in their fields. To fund their research, they apply for public and private grants and after the research is finished, they write a paper about their findings. Then they submit that paper to relevant academic journals.

Then it goes through a process called peer review, which essentially means that other experts are checking it for accuracy and credibility.

And then, once it’s published, for-profit companies resell that information back to universities and public libraries through journal and database subscriptions. So, that’s the system.

Research, write, peer-review, publish, repeat. My friends and I call it feeding the monster. And you can see how this might create some problems. The first problem is that most academic research is publicly funded but privately distributed.

Every year, the federal government spends $60 billion on research. According to the National Science Foundation, 29% percent of that goes to public research universities. So, if you’re quick at math, that’s $17.4 billion. Tax dollars!

And just five corporations are responsible for distributing most publicly funded research. In 2014, just one of those companies made $15 billion in profit. It’s a big business.

And I bet you can see the irony here. If the public is funding academics’ research, but then we have to pay again to access the results, it’s like we’re paying for it twice.

And the other major problem is that most academics don’t have a whole lot of incentive to publish outside of these prestigious subscription-based journals. Universities build their tenure and promotion systems around the number of times scholars publish.

ALSO READ:   The Art of the Comeback: Heidi Ganahl at TEDxMileHigh (Full Transcript)

So, books and journal articles are kind of like a form of currency for scholars. Publishing articles helps you get tenure and more research grants down the road.

But academics are not rewarded for publishing with popular media. So, this is the status quo. The current academic ecosystem. But I don’t think it has to be this way. We can make some simple changes to flip the script.

So, first, let’s start by discussing access. Universities can begin to challenge the status quo by rewarding scholars for publishing not just in these subscription-based journals but in open-access journals as well as on popular media.

Now, the open-access movement is starting to make some progress in many disciplines, and fortunately, some other big players have started to notice. Google Scholar has made open-access research searchable and easier to find.

Congress, last year, introduced a bill that suggests that academic research projects with over 100 million or more in funding should develop an open-access policy.

And this year, NASA opened up its entire research library to the public. So, you can see this idea is beginning to catch on.