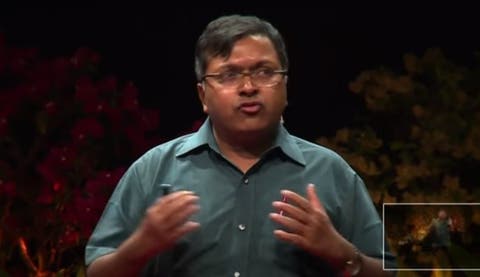 The Indian Approach to Business by Devdutt Pattanaik (Full Transcript)

Full text of Devdutt Pattanaik on The Indian Approach to Business at TEDxGateway 2013 conference.

Listen to the MP3 Audio here: The Indian approach to business by Devdutt Pattanaik at TEDxGateway 2013

Whenever you read management books, I find that they’re mostly written by Europeans and Americans. And there’s an uncanny resemblance between modern management and stories from the Bible.

Think carefully. You begin with the problem statement. Then you have the vision, the mission, the objective, the goal, target. Then you have your tasks, your standard operating procedures, your regulations, your guidelines, your principles. And finally, you have the auditors, internal auditor, the external auditor, the government, the regulator, then you go towards the great promised land called profit.

It’s a place where hunger is indulged, your wants, your desires, your needs, anything that you want is satisfied. And the king of this land is called Indra and he’s a prosperous king. He sits on elephants and he’s happy and he’s powerful. But Swarg is always under siege. There are always wars happening.

You see if a raja or a king performs a Yagya, goes to war, Indra gets insecure and immediately seals the horse. If an asura is born, he runs to his father and says, “please kill him”. And if a rishi starts tapasya, he goes to the apsara department, and say, “Rambha, unleash yourself”.

Which brings me to the second promised land, which is Kailash. It is Mount Kailash. It is a mountain of stone covered with snow. Here hunger is outgrown, it’s destroyed. Now why do I say this? For that you have to look at this image very very carefully. It’s this popular street image of Kailash. Look at it very carefully. You can see a bull – Shiva’s bull Nandi, and opposite that is Parvati’s lion. And the bull is not quivering in fear. There is no predator, there is no prey.

But, of course, the goddess won’t let him be at peace. You see, woman power.

What does the goddess say? This is all fine. You are not hungry; what about other people’s hunger? What about my children’s hunger? You have outgrown hunger. But what about other people’s hunger? And that brings us to the third promised land, which is Vaikun — the third promised land. Here Vishnu is reclining on a serpent and is surrounded by affluence and abundance. But their prosperity is accompanied with peace. There’s also peace here.