Following is the full transcript of British journalist Lucy Siegle’s TEDx Talk titled “The Wardrobe To Die For” at TEDxSalford conference.

Listen to the MP3 audio while reading the transcript: The Wardrobe To Die For _ Lucy Siegle _ TEDxSalford

Now, I’m going to talk to you about fashion by numbers, because I love fashion and I love style, and I think there’s lots of really absorbing things about the industry and about the idea of expressing ourselves through clothes.

But there are also some issues, which we will get to in a minute, and I think some of the numbers are just gigantic and they’re quite illuminating.

So, the first statistic, when I was doing a lot of research on the contemporary fashion industry, was one that I had to estimate by putting together lots of different research. And I figured out that there are about 80 billion new garments that are created every year. Some of you, like me, might feel that most of those end up in your wardrobe, it depends how avaricious a buyer you are. Some people might feel that they all end up in your laundry basket, which I also feel, having to do my family’s laundry.

So, that’s an estimated number of new garments produced worldwide every year.

Now the weird thing is that we still end up with 2 million tonnes of textiles, mainly apparel, in landfill every year. So, we’re slinging them away almost as quickly as we can buy them. Which points to a certain disposability, a certain throwaway culture, in fashion.

19 is the number of jeans that I found in my own wardrobe, when I did an inventory of my wardrobe. And I would recommend to anybody that you do an inventory of your wardrobe, because it’s really, really illuminating. Even if you think that you’re not a fashion addict, you’re not a fashion victim, you will be surprised at how many duplicates you have.

So, I have 19 pairs of jeans and that’s significant because — not because 19 is my lucky number, but it is, that’s not why I bought them — I didn’t realize I had 19, because I just kept consuming without realizing. And when I thought about it, the environmental footprint of fashion is absolutely enormous. So, for example, it takes between 11,000 and 20,000 litres of water to produce enough cotton for a single pair of jeans.

And then I started to look at the impact of fashion generally. Now, fashion is a full spectrum industry, and with the exception of the food industry, and perhaps the energy industry, it’s hard to think of any other sector that owes quite as much to the planet as fashion does.

We’re all a nation of fashion addicts, that’s how we’ve become, and that’s been enabled really over the last twenty years by a phenomenon known as fast fashion.

Now, sometimes, it’s quite difficult to imagine how people got dressed 20 years ago, before fast fashion really kicked in, but we know they did, but did they all just wear the same pair of Dralon flares? How did they actually manage it? Because what we’ve done is we’ve developed a whole new system of getting dressed, which revolves around very, very quick microtrends that can very quickly translate from the catwalk into our wardrobes and onto the high street.

ALSO READ:   What is a Thought? How the Brain Creates New Ideas: Henning Beck (Transcript)

So, we think about how fashion actually presents itself. What it doesn’t really do, is tell you how much it’s changed over the last 20 years. So, there will be people here who’ve never known anything else. Lucky them, because they’re nice and young, but, there has been a completely revolutionized system to the way apparel is produced and sold.

But we really don’t get this idea from the fashion weeks that we have. It presents a very traditional face. So, we have the two seasons, we have autumn/winter and spring/summer, and then these are when we trickle things down from the catwalk into store, and they set the trend of what we’re going to be wearing. 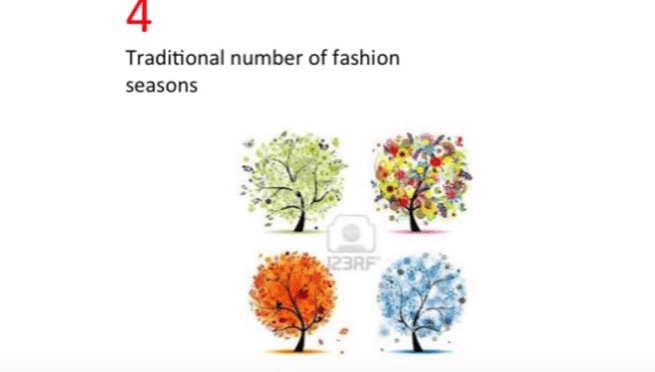 Every week there are new styles, there is new stock in shops, new stock online, and it’s become a very, very quick process. Some people would call it a churn.