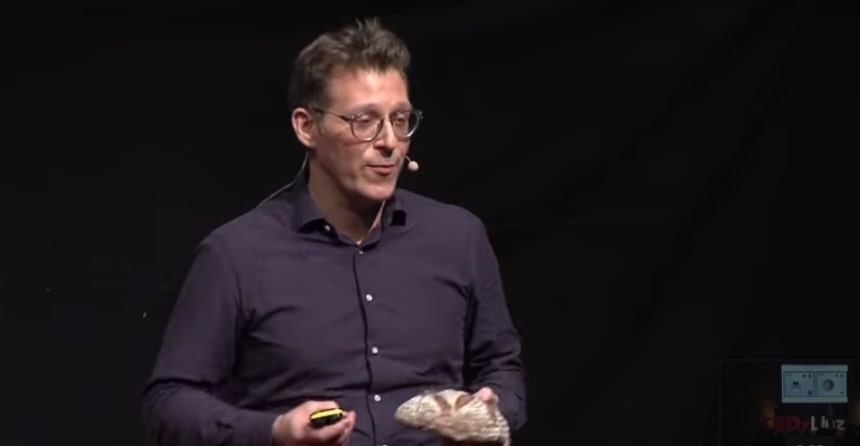 About 10,000 years ago, our ancestors settled down and formed farming societies, basically with the aim to create sustainable food production and enable food security for themselves and their families and their societies.

But bread was an accidental discovery. And it was considered such a miracle when bread was discovered that it found its way into religious practices. That’s why you have prayers where you say, “Lord, give us our daily bread.”

And in the Middle Ages, bread became synonymous with quality of life, because traveling salesmen used to carry two leather pouches on them: one which was for their earnings, the money that they earned, and one for sourdough starter that they carried on them. And wherever they settled down for the night, they were able to create a fresh piece of bread out of that sourdough starter.

So bread, beyond being a staple food, found its way in our daily use in language across different cultures and stands for quality of life.

So for example, in English, when you say the breadwinner, it’s the person that sustains the quality of life in the household. Or in German, in business, you say this is my Brot- und Buttergeschäft, my bread and butter business — it covers the basics.

So bread is beyond just a food item, staple food item, it is synonymous with quality of life, community, and friendship.

And now, imagine you take this fresh piece of bread. And funny enough, my talks are always before lunch, so I’m sorry if you feel hungry.

So imagine you smell this fresh loaf of bread and you feel the crust in your fingers and you hear the crunch as you bite into it, and immediately, it evokes positive memories of family, of good times you had, maybe childhood with family and friends.

And being German, bread, beyond just being the staple food, is really important for us Germans. In Germany, we have about 3,200 variations of bread alone. We have bakeries pretty much on every street corner, luring you in with their beautiful smell of fresh bread.

And what’s interesting is when you meet Germans that live abroad, because they are expats, bread will become a topic at some point in conversation. They will probably start baking it at home, or when they go home to visit friends and family back in Germany, they will just carry a suitcase full of fresh bread from home so it’d last for a while, typically German.

So, when we heard that the German astronaut Alexander Gerst was going to fly to the International Space Station — of course, he spent six months on average; he actually stayed eight months up there — we thought, “Wouldn’t it be great if we built him an oven that would allow him to experience that happiness of having a fresh piece of bread so he could bite into it and feel connected with earth?”

It’s not just the one German national but maybe we have a tool here, a stepping stone that allows us to go further into space to allow us to perform human exploration, and to allow humans to go further.

So just imagine the situation: You’re in your space tin, you’re looking out through the window at the distance of your home planet — it’s just a tiny speck of blue like that little star there in the picture. And wouldn’t it be amazing if you prepare yourself a fresh loaf of bread and you feel instantly connected, at the moment you bite into it, with home?

ALSO READ:   Why You Will Marry the Wrong Person: Alain de Botton (Transcript)

Now the reality is more like this. This doesn’t really connect you back to home. Most space food is really dehydrated or canned. It’s very expensive to get it up into space.

So beyond being just a cost problem, imagine feeding a crew traveling to Mars — the journey takes about one and a half years there and back — now how would we enable sustainable food production or sustainably feed them on their way to Mars? Do we send food parcels with cargo ships that follows their ship? — probably will never reach them in time.

Do we have food islands dotted around between Mars and Earth, that are kind of orbiting those two planets, and they just replenish their supplies? Or do they carry everything with them?

And we did a calculation, roughly: If you sent a crew of seven people to Mars and you wanted to feed each one a fresh bread roll per day, you’re looking at about four tons of flour alone that you need to carry with you, which is really unsustainable. I guess you’d agree.

So, what we thought about with “Bake in Space” is really how to create this value chain from growing grain to baking bread. And we devised a five-step plan that would basically allow us to grow crops, harvest the grains, grind them down to flour, knead it to dough, and then bake the dough into a fresh bread roll.

And our goal was to start at the end of it — that’s why phase one is actually on this side — because first we want to understand what we want to bake and how to achieve that, before we then start looking at what ingredients we need and what processes are necessary to achieve that.

Because baking is really hard in space. This is the concept prototype oven that we’ve developed. And we realized quickly that there are many technical challenges that would need to be overcome.

So one issue is crumbs, because crumbs are actually lethal in space, not only for machinery. It can get into the machines, but it can also get into the lungs of the astronaut, it can get into the eyes. And there’s not a doctor that you can immediately ask for help.

Fire is an issue, so we have to create an oven that is completely separate from all the other machinery so it doesn’t affect any other machines or the space module if a fire occurs.

All the exposed surfaces, any surface that the astronaut is able to touch, is not allowed to be hotter than 45 degrees because the astronauts can get burnt on it. And we only have 250 watts of power available, which is a tenth of what you have here on earth, which basically requires a lot of insulation to enable us to achieve a baking temperature of 220 degrees inside the oven.

And then, there’s the issue of the baking procedure. Here on earth, you would basically preheat the oven, open it, put something inside and bake it. This is not possible in space, because we have the risk, a) the open oven door, of course, has an exposed surface that the astronaut can touch. But the other thing is if we leave the door open, there’s the risk that the hot air bubble can escape the oven in one piece, and air doesn’t automatically mix with the surrounding air, so you have an invisible hot, 200-degree air bubble just sitting in the space station, and an astronaut flying through it will seriously get burned.

So what we need to do is to recreate the baking procedure and that implies that we have a cold oven, we put our dough inside, we heat it up, we bake it, and then cool it down to below 45 degrees, which means that it takes a lot longer to bake something in microgravity.