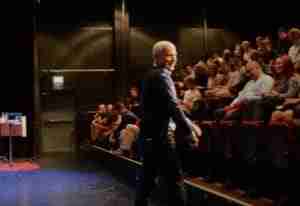 Staffan Ehde: Who Decides What You Think? Not You... at TEDxYouth@Helsingborg (Transcript)

Here is the full transcript of Staffan Ehde’s TEDx Talk: Who Decides What You Think? Not You… at TEDxYouth@Helsingborg conference. This event occurred on May 14, 2016.

Staffan Ehde: So how many of you want to conquer the world for the better? All right. Good. Why don’t we say it? You want to…

But the sad news is that most of us in this room are going to end up being just that boring. So how come that some young people that are resourceful, they have everything, accomplish nothing, and some people that are sourceful and have nothing, can change the world? That’s what we are going to look at today.

So she promoted me to my own incompetence by deciding that I was going to be the skipper. And you know, the skipper is the guy who takes all the important decisions, and then my wife decides what is important. So, when you’re out there sitting in the cockpit and the waves are about four meters high, and the wind is blowing through the rig with the 40 knots strength, and it’s really whistling, and you’re sitting there by yourself, because the other ones are sleeping, then you suddenly hear a voice. A voice of fear. And I got really interested in what is that voice.

Who is it that is trying to call me back to my comfort zone? Why is it so hard to make something different with this voice coming from within, doing actual damage to me? Let’s start from the beginning.

I have my son, he’s three years old, he’s standing next to me by a hill. You can think San Francisco, a really steep hill with a gravel road that goes. One second he stands next to me, the next second he’s running like crazy down that road. His legs are like drumsticks, you know, a small three-year-old.

And of course, I start to shout, “Stop it! You’re going to kill yourself!” And of course, he takes off, he starts to fly like a bird. For a second. And then he crashes, I scoop him up, I try to comfort him, but by some reason, women are better at that, so my wife takes over. And she tells me to get some water and some napkins so we can clean his wounds. So I walk away, I get some water and napkins, come back.

Now, if that wasn’t enough, we had a few more messages for our kids. This must be the dream PowerPoint. And I’m going to read everything for you. No, I’m not. The one that I love the most is, “You are just like your father”. What’s wrong with that?