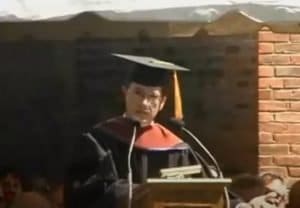 Announcer: Mr. Colbert, by the authority of the general assembly of the state of Illinois, vested in the Board of Trustees of Knox College, and by them delegated to me, I hereby confer upon you the honorary degree of Doctor of Fine Arts entitling you to all the privileges, honors and dignities which here and elsewhere pertain.

Thank you. Thank you very much. First of all, I’m facing a little bit of a conundrum here. My name is Stephen Colbert, but I actually play someone on television named Stephen Colbert, who looks like me, and who talks like me, but who says things with a straight face he doesn’t mean. And I’m not sure which one of us you invited to speak here today. So, with your indulgence, I’m just going to talk, and I’m going to let you figure it out.

I wanted to say something about the Umberto Eco quote that was used earlier from “The Name of the Rose.” That book fascinated me because in it these people are killed for trying to get out of this library a book about comedy, Aristotle’s commentary on comedy. And what’s interesting to me is one of the arguments that they have in the book is that comedy is bad because nowhere in the New Testament does it say that Jesus laughed. It says Jesus wept, but never did he laugh.

But, I don’t think you actually have to say it for us to imagine Jesus laughing. In the famous episode where there’s a storm on the lake, and the fishermen are out there. And they see Jesus on the shore, and Jesus walks across the stormy waters to the boat. And St. Peter thinks, “I can do this. I can do this. He keeps telling us to have faith and we can do anything. I can do this.” So he steps out of the boat and he walks for — I don’t know, it doesn’t say — a few feet, without sinking into the waves. But then he looks down, and he sees how stormy the seas are. He loses his faith and he begins to sink. And Jesus hot-foots it over and pulls him from the waves and says, “Oh you of little faith.” I can’t imagine Jesus wasn’t suppressing a laugh. How hilarious must it have been to watch Peter — like Wile E. Coyote — take three steps on the water and then sink through the waves.

Well, it’s an honor to be giving your commencement address here today at Knox College. I want to thank Mr. Podesta for asking me two, two and a half years ago, was it? Something like that? We were in Aspen. You know being people who go to Aspen. He asked me if I would give a speech at Knox College, and I think it was the altitude, but I said yes. I’m very glad that I did.

On a beautiful day like this I’m reminded of my own graduation 20 years ago, at Northwestern University. I didn’t start there, I finished there. On the graduation day, a beautiful day like this, we’re all in our gowns. I go up on the podium to get my leather folder with my diploma in it. And as I get it from the dean, she leans in close to me and she smiles, and she says – (train whistles) — that’s my ride, actually. I have got to get on that train, I’m sorry. Evidently that happens a lot here.

So, I’m getting my folder, and the dean leans into me, shakes my hand and says, “I’m sorry.” I have no idea what she means. So I go back to my seat and I open it up. And, instead of having a diploma inside, there’s a scrap — a torn scrap of paper — that has scrawled on it, “See me.” I kid you not.

Evidently I had an incomplete in an independent study that I had failed to complete. And I did not have enough credits. And, let me tell you, when your whole family shows up and you get to have your picture taken with them — and instead of holding up your diploma, you hold the torn corner of a yellow legal pad — that is a humbling experience. But eventually, I finished. I got my credits and next year at Christmas time, they have mid-year graduation. And I went there to get my diploma then. And they said that I had an overdue library fine and they wouldn’t give it to me again. And they eventually mailed it to me I think. I’m pretty sure I graduated from college.

But I guess the question is, why have a two-time commencement loser like me speak to you today? Well, one of the reasons they already mentioned I recovered from that slow start. And I was recently named by Time Magazine one of the 100 Most Influential People in the World! Yeah! Give it up for me! Basic cable The World! I guess I have more fans in sub-Saharan Africa than I thought. I’m right here on the cover between Katie Couric and Bono. That’s my little picture — a sexy little sandwich between those two.